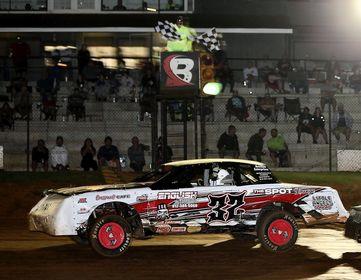 80 cars entered the pits at the red clay on Friday night as 21 non wing sprints were ready for battle on the high banks. 3 groups were led in qualifying by Matt Thompson(12.024), Jadon Rogers(11.483) and Max Adams(11.325). Heat races were won by AJ Hopkins, Jordan Kinser who is leading the points and Andy Bradley. This would setup the A main with an invert of 1 which would put Matt Thompson and AJ Hopkins on the front row. Matt Thompson started out with the lead but on lap 2 the red would fly with a flip in turn 4 by Jackson Slone. Thankfully Jackson was okay because it was a scary flip off of the high banks. On the restart AJ Hopkins took the lead but after being in the lead for a few laps he got over the bank in turn 2 and that ended his run for the night with damage. On the restart Matt Thompson and Jordan Kinser would take the top 2 spots but Jadon Rogers was flying to the front and took over the lead. Another red came out as Andy Bradley flipped in turn 4 ending his great top 5 run for the evening. On the restart Jadon Rogers held on to the lead for the final laps and took the win over Jordan Kinser, Max Adams, Brayden Fox and Brady Short. With only 1 race to go in the 2021 season at Bloomington Jordan Kinser looks as if he will be the champion with a sizeable lead of over 25 points going into the finale.

The Open Bomber field brought 15 entries to the red clay and DJ Dunn(14.850) and Megan Cavaness(15.124) led the way in qualifying. Heat races were won by David Bumgardner and Michael Nail. This setup the feature with an invert of 4 which put Megan Cavaness and Steve Hollars on the front row. The open Bomber fields have been a very equal match of the LPS type Bombers versus the Pure Stock type cars from the Southern Indiana tracks and it has made for some great battles. This nights feature would be a great battle to the end with Michael Nail making a great pass on the bottom of turn 4 with just a few laps to go over David Bumgardner to take the win. Following those two at the end were Steve Hollars, Keaton Streeval and Megan Cavaness. Thanks to all the Bomber teams that made the trip to Bloomington Friday night.

The final class of the night brought a huge 28 entries as the Hornets came out in full force for a $500 to win show that was also sponsored by Flynn Insurance. Also thanks to AJ Bolen for the hard charger sponsor. Heat races were won by Chad Taylor, Shane Reed, Brian Pollitt and Alex Wilson. The B main was won by Jacob Owens. This setup the feature with an invert of 5 which put Dale Hobbs and Alex Wilson on the front row. Dale Hobbs would take the early lead but on the backstretch he got over the cushion and ended up rolling his car but stayed on the gas after the flip and drove it back to the pits. The crowd was amazed but there was damage to the car so he drove it to the pits. On the restart Brian Pollitt took a nice lead and held on the whole way winning the $500 for the top spot over Dylan Wheeler, Alex Wilson, David Waggoner and Chad Taylor. Thanks to all the hornet teams for bringing a huge car count to the red clay and they will be running again next Friday for the finale with Non Wing Sprints, Super Stocks and the always great MMSA group. See you next Friday at the final race of the year at Bloomington Speedway.