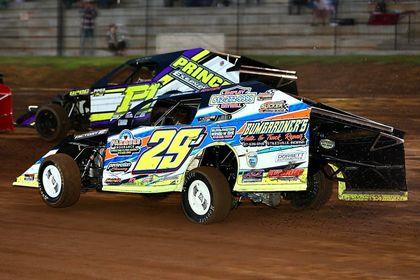 28 Sprints entered the gates at Bloomington for the final night of the season on the red clay. The fast times in their groups were Brayden Fox(13.029), Geoff Ensign( 12.619), Braxton Cummings( 12.655) and Gabriel Gilbert( 12.374). The heat invert was an Ace so straight up. Heat race winners were Alec Sipes, Geoff Ensign, Jadon Rogers and Gabriel Gilbert. The last chance to get in the A was won by Brady Short. The red clay was really juiced up and the speeds were not slowing down. The invert for the feature was a 5 which put Brayden Fox and Gabriel Gilbert on the front row. Brayden and Gabriel looked strong early but the 14 of Jadon Rogers was able to take the top spot and started to get to lapped traffic by lap 10. By lap 10 Geoff Ensign was on Jadon's bumper and would make the move a few laps later to take the top spot. This was a battle royale for the final night of the season as Geoff, Jadon and Brayden were ripping super fast laps around the red clay. With just 2 to go Jadon made a strong move in turn 4 and it appeared the front 2 made contact but everything was fine and both front two never missed a beat and Geoff Ensign would not only hold on for the win but he would be your 2022 Bloomington Speedway Champ. The team celebrated in victory lane with 2 bottles of champagne spraying all over the Champ. Congrats to the entire #44 team on a great year. Following Geoff at the finish it was Jadon Rogers, Brayden Fox, AJ Hopkins, Sterling Cling and Tye Mihocko who came from 14th to 6th. Thanks goes to all the awesome sprint teams that came many Friday nights and always put on great shows.
17 UMP mods were in the pits and the 2 fast times in their groups were Ryan Thomas (13.460) and Jordan Wever(13.577). Derek Losh and Jeff Deckard won the heat races. The invert for the A main was a 4 which put Jordan Wever and Ryan Thomas on the front row. Jordan Wever would lead at the start and stay at the point for all 20 laps picking up the big win and the 2022 championship. Congrats to the 29J entire team on a great season and they are leading the State in points and 10th in the nation with just a few weeks left. Following Jordan at the finish was Ryan Thomas, Derek Losh, Jeff Deckard and Tyler Loughmiller. Thanks to all the UMP Mod teams that gave us some fantastic shows on the red clay many Friday nights.
The UMP Super Stocks had 14 cars in the pits and the fast times went to Jeff Allen( 15.267) and Grant Simpson(15.016). The heat races were won by Andrew Davis and Austin Phelps. We were very sad to see smoke coming from the 79 Zach Sasser car with a few laps to go in his heat race ending his night and also ruining a great run for back to back championships at Bloomington. In the A main Austin Phelps would lead the entire 20 laps and pick up the big win and the championship at Bloomington. Congrats to the entire 81P team for their championship. Congrats also to Zach Sasser who led the points for a lot of the season also. Both Zach and Austin have had an awesome battle for the UMP Title this year with just a few weeks to go. Following Austin at the finish it was Jeff Allen, Greg Amick, Austin Perry and Cale Kern. Thanks goes out to all of the UMP Super Stocks that put on an awesome show for us all year.
The UMP Hornet class had 14 entries on the final night. The heat races were won by Chad Tayler and AJ Hobbs. The invert for the A main was an Ace so Chad Tayler would start from the pole. Chad led all 15 laps and took the big win and the championship to end the night at Bloomington Speedway in dramatic fashion. Following him at the finish it was Jacob Owens, Michael Brewer, Matt Miller and Dale Hobbs. Congrats to the entire #56 team for their championship as Chad Taylor did some victory donuts in Victory Lane also to end the night. Thanks to all of our teams that put on a great show every night and our awesome fans who helped fill the hill for the 2022 season. We will see you all at the banquet and then get ready for the 100th year celebration starting in April of 2023.