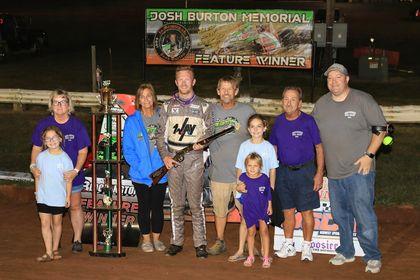 With perfect weather for Josh's race the pits were over packed. 48 sprints cars were in the house trying for the big 10 grand to win payout at the Josh Burton Memorial Race ran by the MSCS group. The fast time went to Brent Beauchamp. The format was going to be 5 heats taking the top 3 and then we would start the D main, C main and the B main to find the final 5 spots for the big show. The 5 heat race winners were CJ Leary, Jadon Rogers, Jason McDougal, Kyle Cummins and Brady Bacon. The D main winner was Alec Sipes. The C main winner went to Saban Bibent. The B main would go to Mario Clouser and would be the last chance to put it in the big show. This setup the A main event. CJ Leary would also win the Dash for Cash which put him on the pole for the 30 lap 10 grand to win Josh Burton Memorial. None of the top 4 took the challenge to go for the 10 grand bonus for starting in the rear. With 138 cars in the pits the A main would be ran late into the night but it did not lack action at all for the 30 laps. The A main went green to checkers with no yellows and that shows how talented the 20 drivers are that made the big show. CJ Leary was on the bottom and Brady Bacon was on the cushion early in the race and they would run side by side for the first 10 laps. The second batch of 10 laps consisted of Jason McDougal who started 5 was on the move and he took over 2nd place before the last run to the end of the 30 laps. The final 10 laps Brady looked to be dropping spots so I am not sure if he was losing the grip on the high side or not. The final 5 laps CJ Leary was able to hit the lapped traffic just right and hold on for the huge win with lots of lap money also being collected. Following CJ at the finish it was Jason McDougal, Geoff Ensign, Brady Bacon and Kyle Cummins. Chase Stockon would be the hard charger for the night and he ended up 6th. He would also still be point leader going into the last couple shows for MSCS. Thanks to the entire Burton family and all of the sponsers that made this show such a great event.
The UMP Mods brought 15 entries into the pits and the fast times for the groups were Jordan Wever(12.916) and Derek Groomer(13.212). This would be the battle amongst these 2 which are also in a battle for 1 and 2 in the state for UMP points. Jordan and Derek would win their heat races and they would start on the front row of the A main. Jordan would take the lead in the A and he would hold off Derek Groomer for the big 20 lap A main win which is important since they are battling it out for the State Championship which is only 4 weeks away. Following Jordan Wever at the finish it was Derek Groomer, John Demoss, John Clippinger and Jeff Deckard.
The MMSA group brought 23 entries with Bryan Brewer setting the fast time for the night. Heat races were won by Cody Knieriem, Brad Strunk and Elijah Knoke. The A main was won by Brad Strunk over Bryan Brewer, Scott Bradley, Kayla Roell and Adyn Schmidt. Another great show by the MMSA group and we appreciate all of the great nights you provided in the 2022 season.
The UMP Super Stocks had 25 entries and the quick times were Matt Boknecht, Steve Hollars and Zach Sasser. The 3 heat races were won by Matt Boknecht, Cale Kern and Zach Sasser. Most of the A main was led by Derek Groomer who was in the #11 Sasser ride. On the final 3 laps of the A main they got into lapped traffic and that is where Matt Boknecht took over the lead and would go on for the big win over Derek Groomer, Zach Sasser, Greg Amick and Austin Perry.
The UMP Hornets had 21 entries. The 3 heat winners were Davey Waggoner, Conner Garrison and Jacob Owens. Jacob Owens would get the A main victory over Jimmy Dutlinger, Michael Brewer, Kaleb Caudill and Davey Waggoner. Thanks to all the great 138 teams who came out to celebrate Josh Burton's Memorial Race. It was an awesome car count with an awesome crowd. Next Friday night Sept. 9th is the season finale. Geoff Ensign and Chad Taylor have comfortable leads and should wrap up the titles. The 2 classes that are a close battle is in the mods Jeff Deckard leads Derek Groomer by 1 point. Zach Sasser has a 7 point lead over Austin Phelps for the Super Stock title. See you at the red clay where we will finish out a great year at the red clay with our awesome drivers and fans.