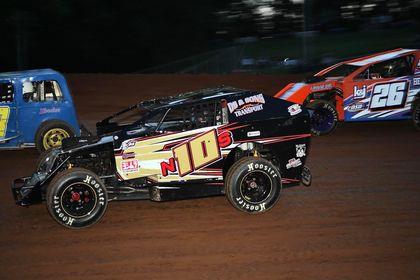 t was a beautiful weather Friday at Bloomington Speedway with finally some low humidity at the race track! 18 sprints were ready to go on a juiced up red clay surface that would produce a lot of 11 second laps throughout the evening. The 3 fast times in their groups were Jackson Slone, Gabriel Gilbert and Ryan Thomas. The invert was drawn for the heats as a 1. Heat races were won by Geoff Ensign, Gabriel Gilbert and Ryan Thomas. This setup the A main and for the A main the sprints once again had an Ace drawn which put Geoff and Gabriel on the front row for the 25 lap A main. Geoff took the early lead and looked very strong on the early laps in his #44 entry. The red clay in my opinion is wicked fast and sometimes that is risky with the high banks. 2 cautions during the race took Andy Bradley and Parker Fredrickson going over the high banks in turn 3. The scary incident happened just after the halfway point when Dickie Gaines went over the bank in turn 3 and took a wicked ride flipping all the way into the turn 4 grassy field. Thankfully Dickie got out of the car right away and was okay. On the restart Geoff stayed in the rocket form and the battle was for 2nd with Brayden Fox and Nick Bilbee. Nick was able to take 2nd and then tried to make up some time to the front. Geoff Ensign had an awesome car and setup because his lead stayed at 4 car lengths most of the race. The points leader finished out the deal and took the checkers over Nick Bilbee, Brayden Fox, Brady Short(from 17th) and Gabriel Gilbert.
The Mod Lites had 13 entries for the Steve Carpenter Memorial Race. The 2 heat races were won by Hal Orndorff and Brandon Freeburg. The invert was a 3 for the feature which put the N10S of Tad Canada on the pole which seemed pretty cool since we were honoring Steve Carpenter on this night. Tad would get a good start but unfortunately a red came out as there was a 4 car wreck involving Dale Grote who flipped and David Luckey, Jimmy Arthur and Hal Orndorff having heavy damage. We are glad the drivers were okay because it was a scary accident. On the restart it was the 171 of Brandon Freeburg that definitely liked the high banked high speed red clay because he was a rocketship. Freeburg until a caution came out had lapped up to 4th and appeared he would maybe lap the field but when the caution came out it bunched up the 4 for 1 more restart. Brandon held on for the win over Jeff Cast, Tad Canada, Andy Tragesser and Casey Davis. Thanks goes to all the sponsors for this race and definitely for the great turnout of cars and most importantly Steve's family that came out. It was great to see how much support the N10S family has and also thanks to Pat Sullivan for a great intro about Steve's race that really was special.
The UMP Mods had 7 entries and Derek Groomer was the fast time. The invert was 2 for the heats but that didn't slow Derek as he won the heat race. In the A main he started on the pole and would lead the entire 20 laps to take the win over Jordan Wever, Brent Lee, Jeff Deckard and Jerry Bland Jr.
The Open Bombers had 7 entries with Jordan Almanza setting the fast time. Jordan also was the winner of the heat race. The feature was one of the best of the night as Jordan and Andrew Pollock battled early bumper to bumper. Then about halfway into the feature DJ Dunn got the middle to work and he passed both Andrew and Jordan and these 3 put on a classic Open Bomber show for sure showing the Purt Stocks and the LPS Bombers are real close on speed and put on a great one for the fans. DJ Dunn held on for the win over Jordan Almanza, Andrew Pollock, Albert Orr and David Bloom.
17 Hornets were entered on this night and it was loaded with talent with #1 and #2 in UMP points in attendance. The 2 heats were won by Greg Garrison and Jacob Owens. The invert of 2 was pulled for the feature which put the heat winners on the front row. Greg Garrison looked strong early in the race but unfortunately he pulled into the infield with a problem. Jacob Owens would then take over the top spot and being #1 in the nation took a huge win over Michael Brewer, Chad Taylor, Andrew Deavers and Dale Hobbs. Chad Taylor and Andrew Deavers are having a great battle for the points and since they finished so close it is sure to be a close finish for the Bloomington championship. Thanks to all the teams and fans that came out Friday night. Please join us at LPS tonight where we have Sprints, UMP Mods, UMP Super Stocks, Bombers and Mod Lites along with the Little Feet challenge where kids race their bikes around the track at intermission. Next Tuesday is the High Limit race at LPS also if you want to see some of the best Winged Sprints in the country. Next Friday at the red clay will be another great show with Sprints, Ump Super Stocks, MMSA mini sprints, Hornets and 305 Wing sprints.