8/14/2022 -
t was a beautiful weather Friday at Bloomington Speedway with finally some low humidity at the race track! 18 sprints were ready to go on a juiced up

Bloomington Speedway back in action this Friday August 12th

8/7/2022 -
Bloomington Speedway is back in action this Friday, August 12th. Sprints, Modifieds, Bombers, and Hornets will provide the racing action! Pit Gate op

Josh Burton Memorial and Fireworks will be Friday, September 2nd

8/4/2022 -
Josh Burton Memorial and Fireworks will be held Friday, September 2nd. MSCS Sprints will be $10k to win, Modifieds will be $1k to win, Super Stocks $ 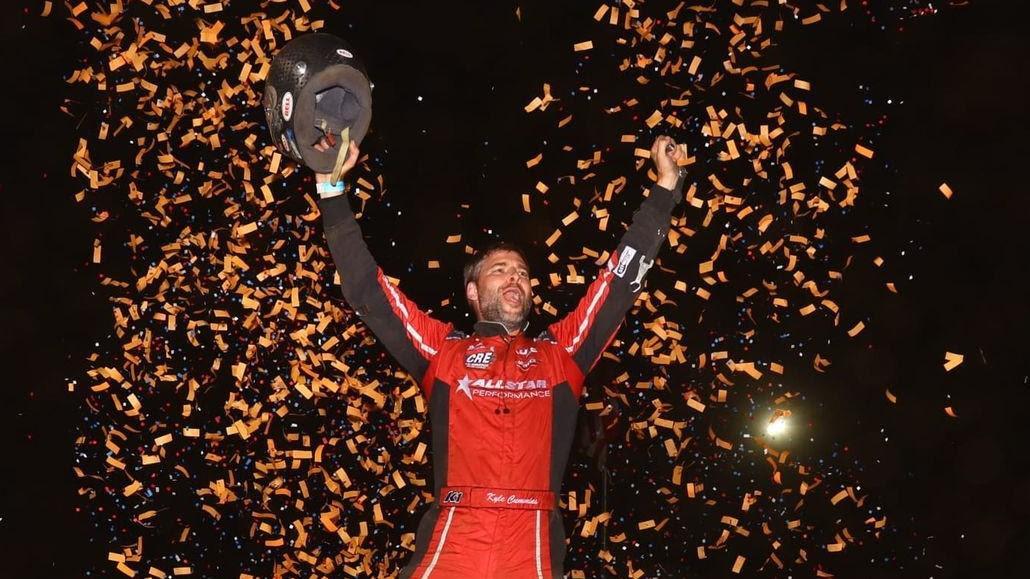 By Richie Murray, USAC Media (Bloomington, IN) -- Following one of the most disenchanting outings of his career the night before, Kyle Cummins flipped the script on his journey to victory Friday night during round six of USAC NOS Energy Drink Indiana Sprint Week at Bloomington Speedway.

On Thursday, the Princeton, Ind. native set fast qualifying time during an aborted rain-interrupted qualifying session, then discovered an engine issue that prematurely ended his night before the requalifying session. Forced to find another ride to finish out the night, Cummins came up short of a transfer spot to the feature and missed the show, thus abruptly ending his Indiana Sprint Week title aspirations.

One night later, the storyline was written differently despite a rocky start which saw Cummins get wiped out in his heat, forcing him to race his way into the main event through the semi-feature. Starting 10th in A-Main, Cummins streaked to fourth by lap five and held steady for the majority of the 30-lap distance in the Sheldon Kinser Memorial / Bubby Jones Master of Going Faster series race number six.

However, on a late-race restart with 13 laps to go, Cummins tried a different approach, cutting a path through the middle of the 1/4-mile red clay oval from fourth to third to second to first in a five-lap successive span that thrusted him into the lead and, ultimately, victory for the first time during this USAC AMSOIL Sprint Car National Championship season aboard his Rock Steady Racing/Ultimate Predator Boats - Mid-America Safety Solutions/Mach-1/Cummins Chevy.

But this one, with the deck seemingly stacked against them following a crash that hurt their car on Monday at Circle City and engine difficulties at Lincoln Park, Cummins and the Rock Steady crew wholly and truly earned this one, even though it may have come the hard way.

“The crew has been sleeping three or four hours a night, so this is pretty special,” Cummins revealed. “We’ve driven back to North Vernon (Indiana) four nights in a row after destroying a car and switching motors. Carl Thomas gave us this motor last week just in case we needed it. I really didn’t want to have to use it. I called him yesterday and he didn’t hesitate to let us run it. We owe everything to him because we wouldn’t be here. This is his motor and it’s the only one we have left.”

Starting from the outside of row five, Cummins had his work cut out for him with the top-three in Indiana Sprint Week points residing one, two and three in the running order right from the drop of the green. Pole sitter and defending Indiana Sprint Week Bloomington winner Brady Bacon skipped out to the early lead, utilizing the top shelf in turns one and two and the bottom in turns three and four to build up a 1.764 second lead in the first five laps with Leary and Grant in tow.

Bacon led a high-wire act when the time came to take on his first hurdle of the feature event just after the midway point as he raced around the outside of lapped traffic while Leary made up substantial ground, slicing Bacon’s advantage from a full second to just a pair of car lengths while Grant and Cummins resided in close quarters just behind in third and fourth.

Behind the top-four, Robert Ballou was on the surge, breaking into the top-five underneath Mitchel Moles on the 18th lap just before attempting a four-wheel drift over the top of the infield tire markers, which bit him at the entrance to turn three and sent him bouncing several times before being tapped by the trailing Moles, which sent Ballou flipping over.

The ensuing restart was truly Cummins’ time to rise and shine as he placed his No. 3R right smack dab in the middle of the racetrack and powered by Justin Grant for third on lap 18, then by Leary for fourth on lap 19 all while using the road less traveled.

“After Justin’s and my deal in the heat race, he had one coming,” Cummins remarked. “So, I was trying a way to where I could at least get third and I just told him, ‘I’m not going to take anybody out,’ but I was at least going to make him think about it. When I dove in down there, the bottom stuck, so I was like, ‘it’s not too bad.’”

Following his disposal of Grant and Leary, Cummins began edging rapidly toward Bacon who denied him just barely at the stripe on laps 20 and 21, but on the back stretch on lap 22, Cummins got a drive that propelled him into the top spot by the time he reached turn three to secure his spot on the top rung.

“I feel like that was the Brady Bacon line and I passed him doing it,” Cummins exclaimed. “I thought for sure Brady was going to go to the bottom, and I just got low enough. The track was just different, and I’m not used to running the middle. I didn’t know what I was doing the last five or six laps.”

A yellow flag on lap 24 found Logan Seavey, who had worked from 23rd to 8th after opting to use a provisional, jumping over the cushion between turns one and two. As he tried to recover and keep his head above the proverbial water, his car was clipped by the ninth-running ride of Jadon Rogers. Seavey slowed to a stop, but restarted and finished 18th.

Nobody had anything to throw at Cummins following the final restart with seven laps to go as Cummins pulled away for a commanding 1.973 second margin of victory over Bacon. Grant slid his way past Leary with three laps remaining to round out the podium in third. Leary grabbed fourth while Jason McDougal made a hard-charging performance from his 16th starting position to finish fifth.

Brady Bacon (Broken Arrow, Okla.) admitted his car just wasn’t quite good enough to run the middle like Cummins did in his ascent to victory. Nonetheless, Bacon came oh-so-close to breaking into the win column once again as he led a race-high 21 laps en route to a second place finish in his Dynamics, Inc./Fatheadz Eyewear – Cressman Sanitation – DriveWFX – Tel-Star/Triple X/Rider Chevy. The runner-up finish was Bacon's best result of Indiana Sprint Week 2022 thus far after previous finishes of third, fifth and third in his previous three starts leading into Bloomington.