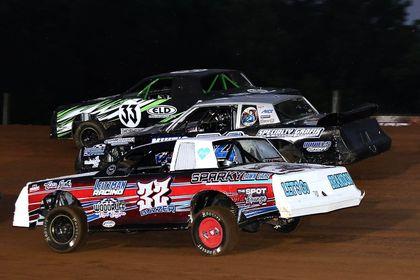 Friday night was a final tune up before Indiana Sprint Week comes to Bloomington July 29th. 27 sprint entries filled the pits and it would be a loaded field. Fast times in their groups were Brayden Fox, Geoff Ensign and Jordan Kinser. The 3 heats were won by Brady Short, Ryan Thomas and Jordan Kinser. The B main was won by Parker Fredrickson. This setup a loaded 20 car field with an invert of 3 which put Jordan Kinser and Ryan Thomas on the front row. Jordan in only his 2nd night in the 04 looked really strong on the start and had the low groove really rolling good. Both the bottom and the cushion were really good as Geoff Ensingn had the top side working and he worked his way from 5th to 2nd and looked as if he was going to give Jordan some company up front. Jordan though hit his mark almost every lap of the 25 and would hold on for a big win for the Burton family just 2 weeks before the big Indiana Sprint Week night at the red clay. Following Jordan at the checkers it was Geoff Ensign, Alec Sipes , Davey Ray and Shane Cockrum. Thanks goes to all 27 teams who put on an outstanding show.
The MMSA joined us with a huge 29 car field. The quick time went to Brad Strunk. Their heat race winners were Brad Strunk, Eric Webber and Scott Bradley. The final chance to get in was the B main and Scott Albrecht won that. This setup the A main for them and after 20 laps Brad Stunk swept the whole night and won the A main and also added to his points lead. Following him at the checkers it was Kayla Roell, Mike Larrison, Brandon Deputy and Scott Bradley. Thanks goes to all of the 29 entries and the MMSA group for always bringing a great field and putting on a great show.
The UMP Super Stocks had 12 entries and Zach Sasser and Austin Phelps both had fast times in their groups and they both came from 4th in their heats to win them also. This setup the A main and an invert of 3 put Sam Arthur and Austin Phelps on the front row. On the start it was a good battle but Austin Phelps took the lead and moved to the bottom. He would lead halfway thru but then the UMP points leader Zach Sasser headed to the top groove and was able to pass Austin for the win. Following Zach at the line it was Austin Phelps, Bryce Shidler, Ralph Groomer and Tommy East.
The Open Bombers had 8 entries. The heat race was won by DJ Dunn. This setup the A main and DJ and Josh Litton made up the front row. For the first 5 laps these 2 would be side by side with DJ Dunn on the bottom and Josh LItton on the top. With just 3 laps to go it appeared that DJ's lead was shrinking on the field. Kyle Prince had made his way up to 2nd and with just 1 to go it appeared he was closing fast. Sure enough on the final corners Kyle Prince made it around DJ and picked up a huge win for the 38. Following Kyle Prince at the line it was DJ Dunn, Michael Nail, Katie Grigsby and Josh Litton.
The Hornets had 16 entries. The 2 heat races were won by Brian Pollitt and Jacob Owens. This setup the A main with an invert of 3 so Conner Garrison and Jacob Owens made up the front row. These 2 would put on a great show and the 20 of Owens was hoping that the 2c of Garrison would miss his mark as he was right on the bumper most of the race. Conner ran a great race and held on for a big win for him. Finishing behind the 2C was Jacob Owens, Jacob Owens, Brian Pollitt and Zach Johnson.
The final class of the evening was the Hoosier Mod LItes and they brought 10 entries. The heat race winners were Andy Tragesser and Hal Orndorf. The feature was won by Jeff Cast over Tad Canada, Dale Grote, Kyle Dautrich and Casey Davis. Thanks to all of the 102 entries that filled the pits at Bloomington Speedway Friday night. Don't forget on July 29th it is Indiana Sprint Week at Bloomington with the 305 wing sprints as the support class.