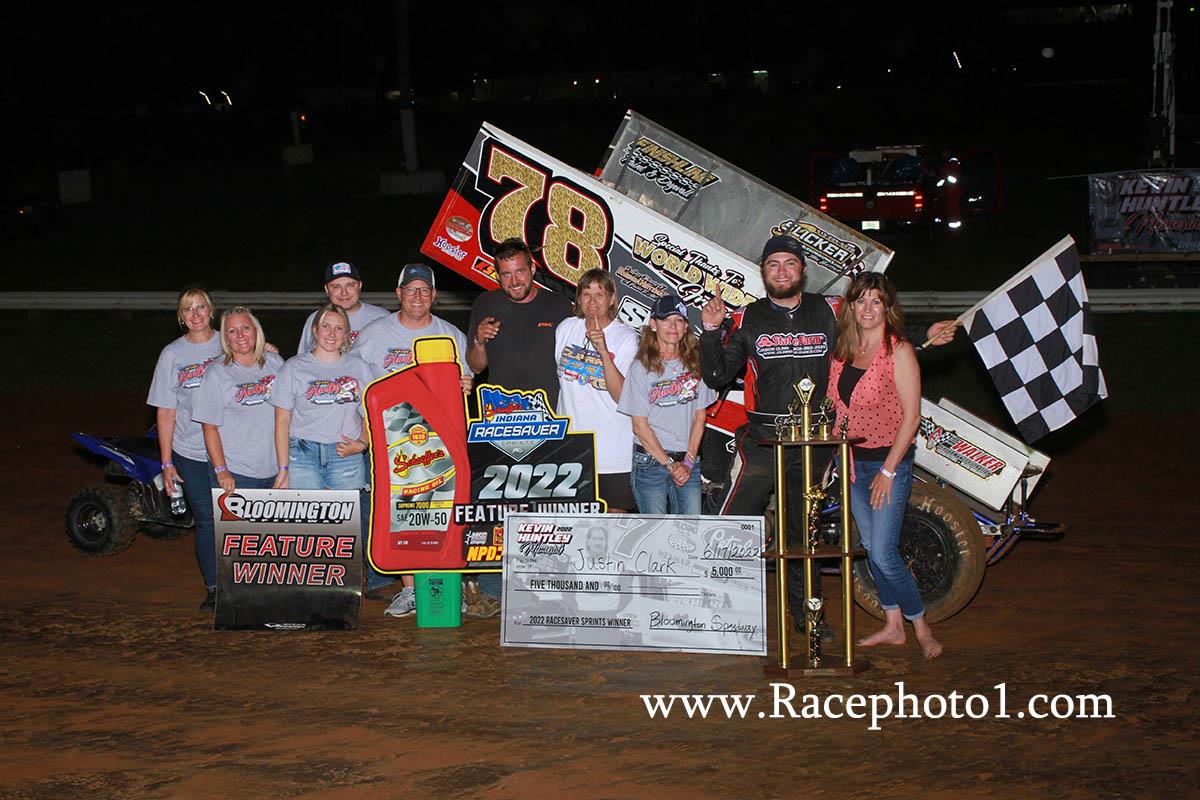 Kevin Thomas Jr. And Justin Clark Win The Big A Mains For The Kevin Huntley Memorial At Bloomington

The Red Clay Friday we were honoring a great friend and racer Kevin “The Pup” Huntley. 27 410 non wing sprints were on hand for the 5 grand to win show. Qualifying was led by Brayden Fox (11.765), Nick Bilbee (11.845) and Todd Hobson (11.843). Heat 1 was won by Kevin Thomas Jr. who was running the 2E Epperson ride for the weekend. Heat 2 was won by Travis Berryhill but unfortunately after the checkered going into Turn 1 he made contact with a lapped car and flipped ending his night. The final heat was won by Brady Short. The B main was won by Cody Trammell. This setup the 30 lap A main event with an invert of 3 which put Brady Short and Geoff Ensign on the front row. Brady and Geoff would have a good battle early but KT Jr. would take the top spot away from Brady and was very strong in his return to a non wing car. After taking the top spot he would build a nice lead and go on for a huge victory for the 2E team. Following KT jr. at the finish line was Brent Beauchamp, Max Adams, Nick Bilbee and Todd Hobson who also got the hard charger bonus for coming from 15th to 5th. It was a great show honoring “The Pup”.

The IMCA Racesaver 305’s brought a strong group of 23 entries. The 3 fast times in their groups were Jordan Welch(11.725), Bryce Norris (11.482) and Ethan Barrow (11.498). The 3 heats were won by Andy Bradley, Justin Clark and Keith Langley. The B main was won by Blayne Ridgley. This setup the A main and they drew the Ace so Andy and Justin had the front row. The 2021 IMCA champ showed why he was the champ. The 78 from Ohio Justin Clark took a strong lead and he would lap a big portion of the back half of the field and win a huge 5 grand in honor of Kevin “The Pup” Huntley. Following him at finish was Ethan Barrow, Rod Henning, Ryan Tusing and Jordan Welch. Hard Charger was Carson Dillion who finished 8th from 17th starting spot.

The UMP Mods had 11 entries and the fast times were Josh Harris(13.021) and Derek Groomer (13.453). The 2 heats were won by Jordan Wever and Derek Groomer. This setup the A main with an invert of 2 so Derek and Jordan were the front row. Jordan took the early lead but on a restart halfway down the front stretch he had a fuel issue ending his night. Caleb Demoss led for a short time after that but then Josh Harris who started 5th would take the lead and go on for the win. At the finish it was Josh Harris, Caleb Demoss, John Demoss, Derek Groomer and Jeff Deckard.

The UMP Super Stocks had 11 entries also with fast times going to Justin Litton(14.140) and Jeff Allen(13.867). The 2 heat races were won by Austin Phelps and Zach Sasser. This setup the A main and the invert was a 2 which put Zach on the pole. In a dominating fashion the 2021 champ at Bloomington added to his points lead and took another convincing win by having a whole straight away lead on the field. At the finish behind Zach was Austin Phelps, Bryce Shidler, Grant Simpson and Justin Litton.

The UMP Hornets had 10 entries. Andrew Deavers won the heat race. AJ Hobbs picked up the big win in the feature over Zach Johnson, Andrew Deavers, Dale Hobbs and Chad Taylor. Thanks to all the race teams and fans who came out to support and honor Kevin Huntley. We would also like to thank all of Kevin’s family and friends that made it such a great night at the red clay. Thanks goes also to all of the sponsors for this big race in Kevin’s honor. We will be back at the red clay July 8th!! We hope to see some of our great red clay fans next Saturday at LPS for the fireworks night and then July 1st and July 2nd for the huge Bill Gardner Sprintacular!!