Kevin Thomas Jr. And Justin Clark Win The Big A Mains For The Kevin Huntley Memorial At Bloomington 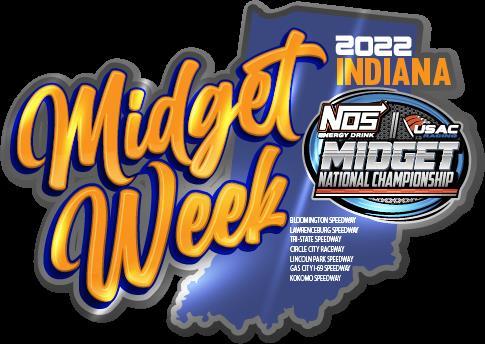 Usac Midget Week night 1 brought 32 midgets into the red clay of Bloomington Speedway. Justin Grant would set the quick time at 11.974. The 4 heat races were won by Cannon McIntosh, Buddy Kofoid, Ethan Mitchell and Logan Seavey. The B main was won by Jace Park. The A main for night 1 of the long 7 race event was won by Buddy Kofoid. It didn’t come easy for Buddy because with just 10 to go the top 4 of Kofoid, Grant, Crum and Cummins were inches apart sometimes 3 wide in the back stretch with heavy lapped traffic ahead. Unfortunately the caution came out ending a 5 lap intense battle which had 3 to 4 lead changes and that many more amongst 1st thru 4th. On the restart Buddy with no lapped traffic ahead would hold on for the win over Chance Crum, Kyle Cummins, Kaylee Bryson and Justin Grant. It got so wild at the front a lot of us missed another wild hard charger move that TMez put on from 22nd to 10th. This was a great show to open up the long week of USAC Midget Week.

The sprint cars brought 22 entries to the red clay. The 3 fast times in each group went to Emerson Axsom(11.921), Geoff Ensign(12.006) and Charles Davis(12.197) The 3 heat winners were also all 3 of the fast times in the group so all 3 winners came from the 4th spot in their heats. This would setup the A main event with an invert that was pulled of 6. Harley Burns and Jake Swanson would be on the front row. Early in the race Harley and Jake would swap the lead with both the top and bottom working good. Emerson came from 6th to battle for the lead but then went over the burm on a small curb in turn 3 and turn 4 which hurt his chances to contend for the win. About at the halfway point the bottom looked to have the advantage. Sure enough the final 5 laps Davey Ray who started 10th passed both Charles Davis and Jake Swanson and took the big win his first of the year. Davey did the cage dance in victory lane definitely showing his excitement for winning against a very stout field. Following him at the finish was a great run by Charles Davis, Jake Swanson, Geoff Ensign and Matt Thompson.

The mod lites brought 6 entries to the red clay Friday night. The heat race was won by Gerald Decker. The main event was won by Andy Tragesser over Tad Canada, William Ryker, Jeff Cast and Joe Boyll. The mod lites will run with us at the Indiana Midget Week Thursday at Lincoln Park Speedway. Next Friday night at Bloomington it will be Sprints, Super Stocks, Hornets, MMSA and the 305’s who will start the night making up a feature from weeks ago when it got rained out. 5 classes with an extra feature is a good bargain for some awesome entertainment. Thanks to all our drivers and our fans for making our Friday nights a great place to be at the Red Clay