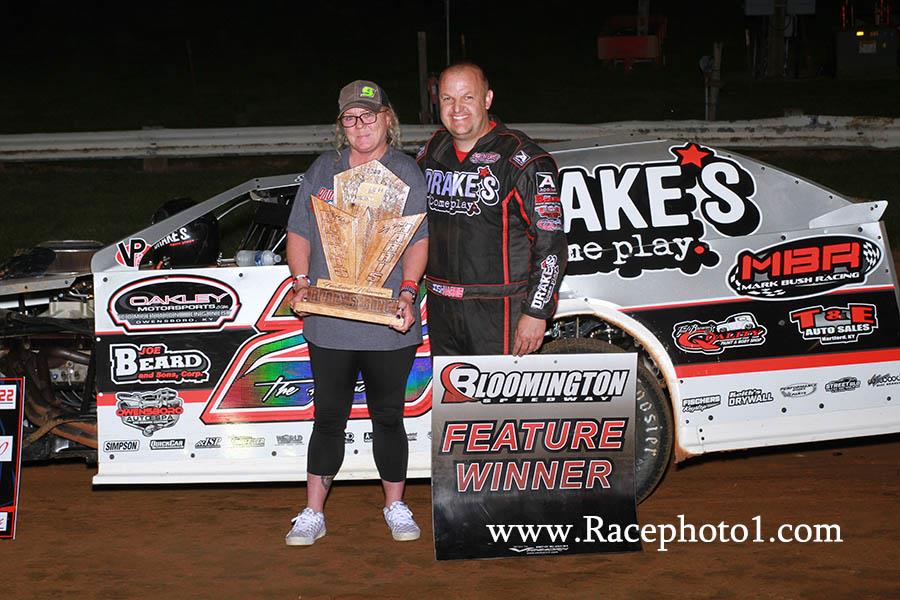 31 UMP Modifieds checked into Bloomington Speedway Friday night for the Rod and Roddy Harris Memorial race. The qualifying groups were split in half. The first group was led by Nick Hoffman with fast time over Josh Harris, Jordan Wever and Victor Lee. The second group was led by Tyler Nicely over Adam Strickler, Dillon Nusbaum and John Clippinger. This would setup the 4 loaded heats with the 4 fast guys starting 4th in their heats. This format makes our heat races so important because the top 2 make it into the invert for the feature. The Mod heat races might have been the most intense part of the show the whole night. Heat 1 went to Will Krup over Jordan Wever, Andy Sherley and Tyler Loughmiller. Nick Hoffman while running 2nd was going to try a move to take over 1st and spun it out in turn 2 which you could hear the whole crowd sigh like WOW was that Nick that just spun because the UMP champ doesn’t usually bring out a yellow at all just checkers. Sure enough it was him and he would have to start at the rear of the B main to get in the show. Heat race 2 went to Josh Harris over Blaze Melton, Brayden Watson and Victor Lee. Heat 3 went to Devin Gilpin over Dillon Nusbaum, Will Bennett and Jeff Deckard. Tyler Nicely would have to go to the B main after getting called for jumping the start during the heat. The final heat was won by Jacoby Hines over John Demoss, Cole Hilton and Jerry Bland Jr. This would setup the B main. It was like a feature lineup and we were only taking 4 to the big show. Tyler Nicely would win the B main over Nick Hoffman(from 13th), Bradley Sterrett and John Clippinger. The Dash was won by Will Krup and he got an ovation from the crowd as he handed his trophy for the dash to a young person in the audience. This setup the A main with an invert pulled of 2 which put Josh Harris and Will Krup on the front row. The 30 lap A main was amazing as we could tell we had a strong field because they went green to checkers in just over 7 minutes. Will Krup took the early lead and would lead up until Lap 21. By lap 10 you could see lapped cars were going to get interesting. Sure enough by Lap 22 Josh Harris took the lead on the top side away from Will Krup and would lead the final 8 laps in his brand new Mark Bush chassis taking home the 4,009 plus 800 in lap money. What a show it was with Will Krup, Dillon Nusbaum, Devin Gilpin and Jordan Wever rounding out the top 5. Thanks so much to all the great teams we had Friday Night to honor Rod and Roddy Harris and to the whole Harris family for putting on such a huge event.

20 sprint cars were in the house Friday night and they were lined up by draw because of a timing issue. The heats were won By Cody Trammell, Brandon Spencer and Brady Short. This setup the A main with an Invert of 4 which put John Ivers and Brady Short on the front row. Anytime you put Brady Short on the front row at Bloomington Speedway you can get the ink pen ready for the check because he is very tough at the red clay. Sure enough the 36 took the early lead and looked to be dominant early. The show of the night was probably watching Kyle Cummins come from 18th to 2nd in the first half of the race. He was flying to the front after breaking in the heat. The final 5 laps were at a real fast pace as on a restart Geoff Ensign recaptured the 2nd place back from Kyle Cummins and definitely was catching Brady for a few laps. Brady would hold on for the win at the finish over Geoff Ensign, Kyle Cummins, Cody Trammell and Brayden Fox.

14 Super Stocks were in attendance Friday night. Justin Litton and Josh Boller set quick times in each of their groups. The heat races were won by Austin Phelps and Zach Sasser. This would setup the A main with an invert of the Ace so straight up. Austin would take the early lead but last years champ Zach Sasser was right there battling. The 79 of Zach Sasser was strong on the bottom and took the lead from Austin in turn 4 and held on for the big win. Following him at the checkers was Austin Phelps, Grant Simpson, Josh Boller, Jeff Allen and Josh Litton. Josh and Zach are in a good battle early in the UMP National points race.

The Hornet Division had 18 entries. The heat races were won by Alex Wilson and Andrew Deavers. This setup the A main with an invert of 1 or an Ace which put the heat winners side by side. Unfortunately only 12 started the A main after some crashes and flips in the heat races took out 6 cars. Thankfully the drivers were ok. The feature ended up being an intense 15 lap shootout amongst Deavers, Wilson and AJ Hobbs. Deavers and Wilson went side by side for the lead for about 7 or 8 laps. At the finish Deavers held off a hard charging AJ Hobbs for the win over Alex Wilson, Chad Taylor and Jeremy Shemwell rounding out the top 5. Don’t forget next Friday the hornets will run a double show to make up for our rainy night on our Usac night. Don’t forget LATE MODELS, LATE MODELS, LATE MODELS next Friday night at the red clay. The Indiana Late Model Series will bring a great field of cars joining the Sprints, Open Bombers , Mod Lites and Hornets Friday May 20th at Bloomington Speedway. Thanks to all the great fans and teams that made the Roddy Strong race a “Classic” full of heavy hitters all battling it out for those precious UMP bonus points.