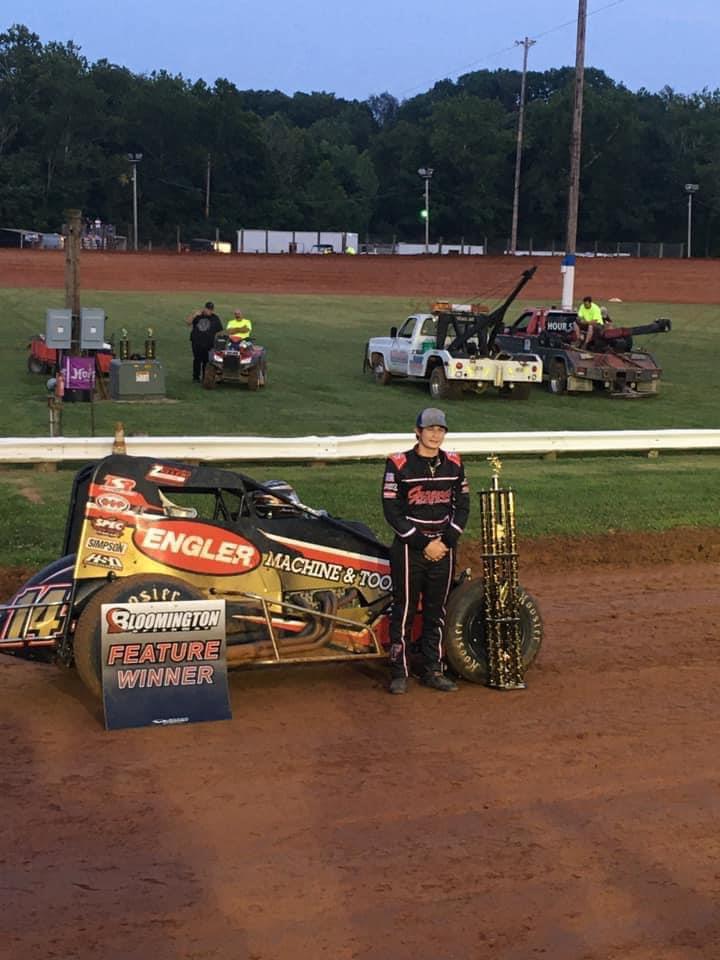 On a night where we remember a legend that raced 3 nights a weekend in Indiana the red clay was really fast in qualifying. Group 1 was led by Jake Swanson with a 12.117. Group 2 and the fastest lap of the night was Jadon Rogers with a 11.846. Group 3 was led by Brady Short with a 12.119. Heat race 1 had Sterling Cling leading all 8 laps from the pole position and Chris Babcock held off Swanson for the 2nd spot which was important because only the top 2 in the heats make the redraw. Heat race 2 was won by Andy Bradley who did excellent holding off Jadon Rogers and AJ Hopkins. The final heat race 3 was won by Jordan Kinser over Braxton Cummings and Dickie Gaines. This setup the redraw and they drew a 0 so Sterling Cling would lead the field for a 30 lap $2500 to win in memory of one of our favorites that was known for the Cigar. Bob's grandson led the field with a pace truck and we left the pole open for Bob on our pace laps in honor of a legend that ran Bloomington, Paragon, Lincoln Park, Kokomo, Lawrenceburg and I'm sure more. Andy Bradley from the 2nd spot got the early lead and was setting a very fast pace on the top side early in the race. The battle from 4th to 8th was wild for the first 5 laps because you had Rogers, Cummings, Hopkins and Swanson all inches from each other trying to get to the front on a hammer down 11 second laps surface that still had a lot of moisture in it. By lap 6 Jordan Kinser had worked his way to 2nd and was catching the 75 of Bradley. The 14 of Rogers had went from 5th to 3rd and then on lap 7 moved to 2nd. Bradley would lead lap 8 but then the 14 of Jadon took the top spot and from Lap 9 on he was a rocket. With about 10 to go Jake Swanson started to catch the 14 some as Jadon was dealing with lap traffic. With 5 to go Jake got within 3 car lengths but Jadon made a bonzai move between 2 lapped cars to keep Jake behind. A final 1 lap shootout after a caution gave Jake one last chance but the Worthington Indiana driver Jadon Rogers held on for the big win.
The UMP mods came out for qualifying and Derk Groomer had a fast time overall of 13.397 in Group 1. Group 2 was led by Jacoby HInes with a 13.452. Heat 1 was won by Derek Groomer over Lucas Pace and Blake Davis. Heat 2 was won by John Clippinger over Jacoby Hines and John Demoss. This setup the A main with a redraw of 3 which put Lucas Pace and John Clippinger on the front row. Jacoby on the start hit the cushion wrong and spun and had to restart at the back. On the second restart Pace and Clippinger had a great battle for the lead. While they were battling for the lead Derek Groomer found a groove above both of them and stormed to the lead. Derek is having a great year leading the Southern Indiana points and very close to the top 10 in the nation. Once he got in the lead nobody would catch him but the move of the night was Jacoby Hines restarting 10th and making it up to 2nd to recover from the early spin. Derek Groomer held on for the win which was his 9th win of the year on the UMP trail. The top 4 in Southern Indiana really put on a great show every night with Derek Groomer, Jordan Wever, Jacoby Hines and Jake Leitzman. Derek Groomer was followed by Jacoby Hines and John Demoss at the checkers.
The Super Stocks were led in Group 1 qualifying by Brad Frye with a 14.302. Group 2 was led by Bryce Shidler with a 13.991. Heat race 1 was won by Justin Massie over Cale Kern and Wes McClara. Heat race 2 was won by Austin Phelps over Bryce Shidler and Zach Sasser. This setup the redraw of 2 which put Austin Phelps on the pole. Austin Phelps ran strong on the bottom early and would win over a strong run by Cale Kern and Troy Knorr. It was a great night at the red clay honoring Bob Kinser. See you next time at Fan Appreciation night August 20th. Then September 3rd the Josh Burton Memorial which was just announced the winner will take home 10 Grand which will be the highest ever winning check at the history of the Bloomington Speedway!!!!!!!!!!!