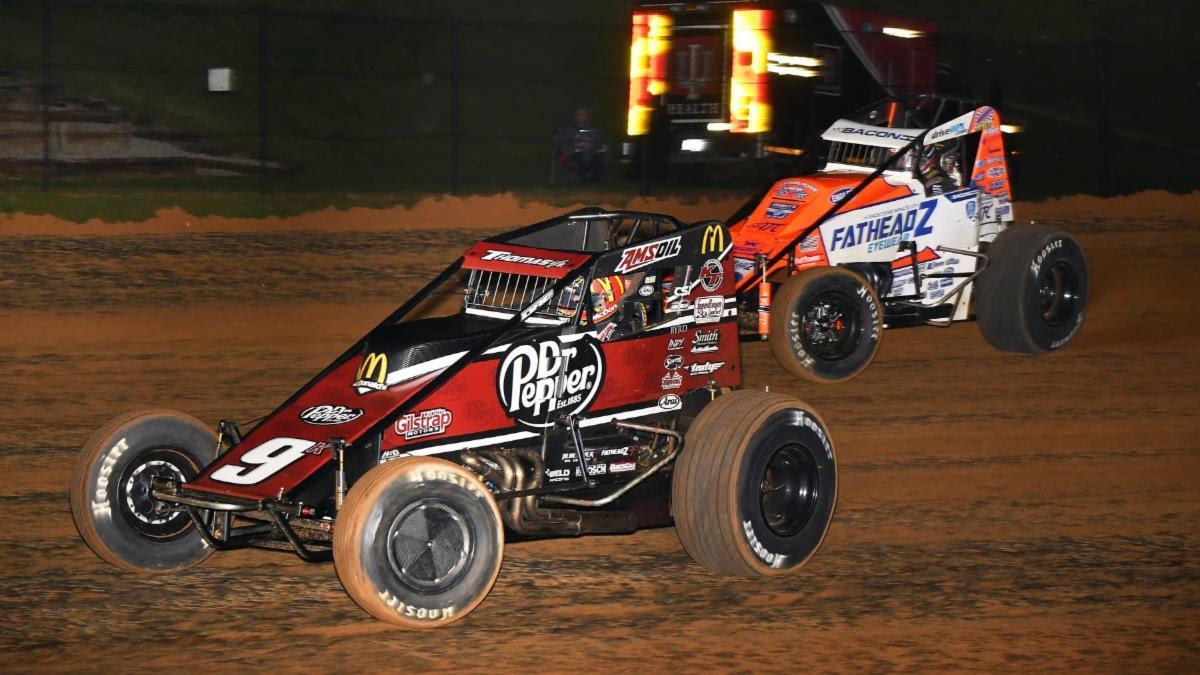 By Richie Murray, USAC Media (Bloomington, IN) -- Sometimes you’ve got to roll with what got you there in the first place. And, on those occasions when you change up the plan mid-stream, you’ve got to find your way back.

Religiously trekking around the 1/4-mile on the top in turns one and two, and on the bottom of turns three and four, Thomas (Cullman, Ala.) ventured down low on a late restart with six laps remaining, losing the lead to Brady Bacon in the process, then raced his way back to the front past Bacon with three laps remaining to become the first multi-time winner with the series this season.

Keep in mind that, over the past two seasons, Thomas had won a grand total of two USAC Sprint Car features. With a pair of victories under his hat in just four appearances (Ocala & Bloomington), it’s marked a sea change of confidence and expectations for the driver of the KT Motorsports/Dr. Pepper – McDonald’s – KT Construction Services/DRC/Speedway Chevy.

“It’s very important, for me especially,” Thomas noted. “It’s one of those things. I got to get rolling and I’ve got to have that confidence that I’ve not had for the last couple years. (Crew chief) Davey (Jones) brings that to me. He’s kind of my safety blanket, and Jason (McDougal) and A.J. (Parker) as well. They got my season turned around last year in a pretty swift manner, so I have a lot of trust in those guys.”

Thomas’ triumph was the fourth of his USAC Sprint Car career at Bloomington, which made him the second winningest driver of all-time with the series at the track, trailing only Bryan Clauson’s five. In fact, the very first of Thomas’ 29 career series wins came at Bloomington in 2012.

Thomas started on the outside of the front row, yet it was pole sitter Shane Cottle who got to the point initially. Cottle led the opening lap before Thomas swiftly drove around the outside of Cottle in turns one two, nipping Cottle at the line at the conclusion of lap two. Thomas raced around the circumference of Cottle in turns one and two on the third circuit, then made a beeline for the bottom of turn three, stealing Cottle’s line and would remain on the same path for much of the remainder of the race.

While the majority of the 24-car driver lineup was deciphering whether to find traction high or low, Bacon had another idea to cut through the middle, slicing his way up to the second position and would continually press the issue with Thomas for the balance of the joust.

Bacon went on the offensive, riding the high line all the way around while Thomas swapped from high to low as he navigated each end of the racing surface. Bacon was able to stay within reach, but Thomas was “steady as he goes” on his current course.

However, with six laps remaining, 20th running Sterling Cling was uninjured after riding out a series of barrel rolls off the edge of the turn four banking. He walked away uninjured.

During the red flag period, Thomas surveyed the track and made the decision to alter his plan of attack.

“When we stopped there for that red, in one and two, I was like, ‘there’s a lot of moisture down here,’” Thomas recalled. “I know I was getting through one and two well, but I didn’t know if it was going to hold up. I knew it was getting thin off two. I was hanging a little bit, so I changed my line.”

After one lap following the restart, Thomas darted back to the high line in turns one and two, but that opened the door for Bacon to stick a foot into as he dove into turn one and slid up in front of Thomas in turn two to snare the lead. Thomas pretty much was required to commit himself to the bottom now, or otherwise follow Bacon’s lead and accept his fate of staring at the Dynamics, Inc. No. 69’s rear bumper.

“It’s a line I hadn’t been running,” Thomas explained. “I went down there, clipped the infield tire, got really tight and gave the lead up to Brady, and I just had to really work for it and focus on hitting my marks and doing what I was doing for the other 20 some odd laps. I don’t know if that was the right thing to do but we did still end up winning the race. That’s a lot to do with the racecar. It went wherever I wanted it to go. I just had to not screw up.”

Racing is a game of concentration as much as it is anything else, and Thomas set his focus on racing the racetrack before being reactionary to what hand his competition was ultimately going to show.

“I never saw Brady until he passed me,” Thomas reasoned. “The way I was running the top in one and two, I didn’t ever look left to see who was under me or if I could see anybody because it was pretty big up there, and treacherous, so I had to really make sure I was paying attention. I had that feeling that somebody was there, and somebody was coming.”

That somebody was Bacon who was now executing the middle/top as Thomas persistently dug his way on the low. With three to go, while exiting turn four, Bacon drifted just a tad high as Thomas nailed his four rubber soles to the huggy pole and shot off the corner in a might to clear Bacon and immediately jumped back to the top in turn one, back to his safe place where all had been relatively smooth for the first 24 laps.

Onward Thomas went unchallenged for the remaining two trips around as he locked up a 1.479 sec. margin victory over Bacon, Kyle Cummins, Cottle and Chris Windom.

A frightening incident at the finish line on the final lap saw Carson Garrett (13th) and Mario Clouser (14th) make wheel-to-wheel contact which sending Garrett careening nose first into the front straightaway wall before flipping over. Garrett climbed from the racecar under his own power but was later transferred to a local hospital for further observation.

Perhaps the most incredible of all longevity streaks in the history of USAC National Sprint Car racing came to an end Friday night at Bloomington when Chase Stockon finished 10th in the semi-feature, coming up shy of a transfer spot to the feature event. Although the team did have a provisional starting position available, they elected not to utilize it. Thus, Stockon’s all-time record streak of 324 consecutive feature starts in USAC National Sprint Car competition was over, a record which dated back to every series race run since 2012.