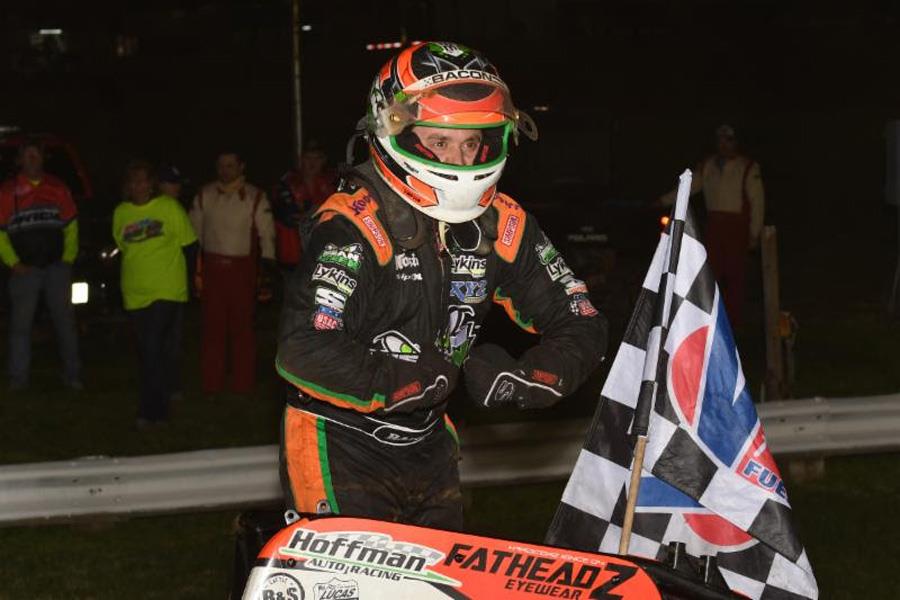 By Richie Murray, USAC Media (Bloomington, IN) -- Following a sluggish start to the season in Ocala, Fla. in the first three races of the year, Brady Bacon made doubly sure he saw the checkered flag in Friday night's "Larry Rice Classic" USAC AMSOIL National Sprint Car feature at Bloomington Speedway.

After results of 7th, 15th and 11th back in February amidst his return to the famed Hoffman Auto Racing/Dynamics, Inc. No. 69, the Broken Arrow, Oklahoma native was anxious to get off the schneid, so to speak, corralling the 24th win of his career with the series, surpassing A.J. Foyt and Roger McCluskey to move into sole position of 21st on the all-time list.

Bacon led all 30 laps from the pole and, in the process, broke an 18-year-old 30-lap track record on the quarter-mile of red clay, previously held by A.J. Anderson, showing that the two-time series champ remains at the top of his game.

"We put our heads together after Florida and tried not to get in panic mode yet because Ocala is just a different place," Bacon explained. "We just made sure we had our i's dotted and our t's crossed when we came here."

There was no stopping Bacon on this evening, even if the reflection of the lights were trying to trick his mind.

"I actually thought I saw the white flag with the way the lights were reflecting off the move over flag," Bacon said. "The flag man was waving it pretty vigorously and I thought it was the white. Luckily, I kept going another lap and I saw it again, so I knew I wasn't right. I just kept going until I knew I saw the double checkers."

From the get-go, Bacon was the class of the field, instantly building his advantage to a half-straightaway over outside front row starter Kevin Thomas, Jr. by lap four. Bacon continued to increase the interval until meeting the tail end of a highway jam on lap nine with a seven-car gaggle jostling for position at the back, pairing down Bacon's lead to a half-second on a closing Thomas.

The winningest driver for the Hoffman family in USAC National Sprint Car competition, Bacon ringed the top in turns three and four and the bottom of one and two as he navigated the narrow crevices between the lappers. With 11 laps to go, Bacon sought daylight between the cars of Stephen Schnapf and Isaac Chapple in turn three. Bacon grabbed the rays, splitting the two to find the welcome view of an unoccupied road out of his visor with two-thirds of the race in the books.

"I was fortunate enough to sneak through a couple times," Bacon recalled. "Your mental clock gets ticking and I kind of had to force the issue a couple times to get by a couple guys. It's part of racing here. It gets a little narrow, but usually there's two grooves here. The bottom was not as prevalent as it typically is here. Usually, you can sneak by lapped cars on the bottom. I was having a tough time doing that, so I had to slide up out of the way."

From that point forward, Bacon was by his lonesome as he lapped up to 13th place on his way to his first career feature victory of any kind at Bloomington aboard his Dynamics, Inc./Mean Green - Fatheadz Eyewear - Tel-Star/Triple X/Hershey Chevy.

It's a sense of sweet redemption for Bacon at Bloomington, picking up his first win at the southern Indiana staple after being on the brink of victory earlier in his career.

"I've run second here a couple times," Bacon remembered. "In 2007 or 2008, I led almost the whole race in the spring like this and slid off the track. I've been coming here for so long, you kind of take it for granted. But it's cool to win at a historic place like this. The green grass in the spring here is always the sign that it's time to go racing. This is a tough racetrack to win at and I'm happy we could do it and to be back with the Hoffman team. I'm glad to shake off our rough start and get back to our usual results."