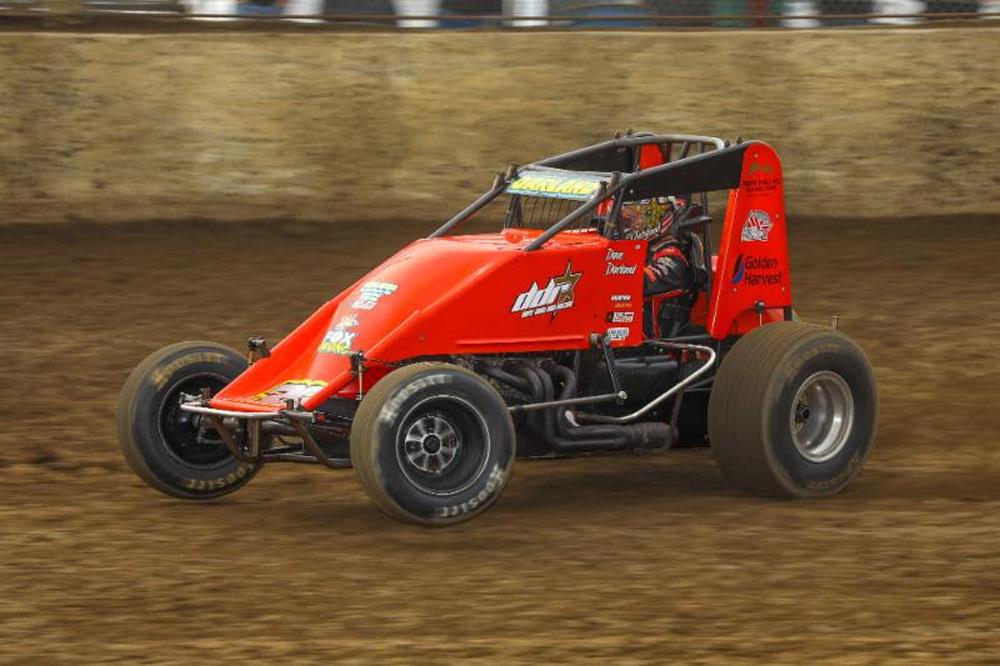 Darland returns to Bloomington with Epperson

By Richie Murray, USAC Media (Bloomington, IN) -- It was one year ago when Bloomington Speedway was a witness to more remarkable feats accomplished by the incomparable Dave Darland.

Now it's impressive enough to notch the feat at all during a career, but it was fitting that "The People's Champ" knocked down these records like a pair of bowling pins in one shot, something we've become so accustomed to over the years.

This Friday night, April 12, a newly-renovated Bloomington Speedway will play host to Darland and the top talent from the USAC AMSOIL National Sprint Car ranks in the "Larry Rice Classic" where he'll have a new machine to pilot, the Epperson Racing No. 2E, which reached victory lane recently with driver Tyler Thomas at Kokomo (Ind.) Speedway in August of last year.

Darland has maneuvered around to multiple teams this year, racing the Chase Briscoe Racing No. 5B to a pair of top-tens on opening weekend in February during "Winter Dirt Games X" at Bubba Raceway Park in Ocala, Fla., finishing ninth twice and 22nd on the final night after being involved in an accident.

On the local level, Darland has been fast in his own No. 36, recently purchased from Baldwin Brothers Racing, the 2017 USAC AMSOIL National Sprint Car owner champions with driver Chris Windom. Darland has been strong, but here now lies a new task ahead of him in a new ride at a track in Bloomington he knows his way around.

Last spring at Bloomington, perhaps no driver had ever scored a more popular win in the history of the series than Darland did that night. To the roar of the crowd, the USAC Triple Crown champ basked in the glory of victory, reminding him of the feeling he's had so many times in his racing career, but had not experienced in 17 months at that point in time, ending a 40-race winless streak.

"It's just taken me forever," Darland said with a laugh following the feature. "Seven-hundred starts and 60 wins. I don't know what happened the other 640 times, but it's been a great career for me. I still love driving racecars and, on nights like this, it's such a great feeling."

Darland began the race from the outside of the front row and, right from the get-go, he and pole starter Chase Stockon were locked in a near dead-heat continuously throughout much of the first half of the event, interrupted only by a Dakota Jackson turn three flip on the third lap of the feature.

On the restart, Darland instantaneously returned to his comfort zone, rim-riding on the ledge while Stockon tethered himself to the bottom. Just as Darland appeared to have the upper hand, the top line seemingly vamoosed for a moment as a re-energized Stockon surged ahead on the bottom to snare the lead by the length of a shoe at the line on lap seven.

As Stockon opened a canyon-wide margin on Darland, the Lincoln, Indiana driver was undeterred, staying true to himself and refusing to wilt and pedal to the bottom. Darland paved his own trail and was going to risk fate, letting his race ride or die on the outstretched arms of the red clay.

"I just decided to stay on top," Darland said firmly. "Everybody's been asking me 'Did you ever consider going to the bottom after getting passed?' I said no, not really. Hell no! But, really, I kind of did. I just knew that the top had potential, but I just had to figure out how to run it better."

"When Chase (Stockon) got around me, I just learned how to run the top harder and that's what I did. I just started running it harder," Darland said. "I figured out where I could hit it and where I had to get away from it, especially down in (turns) one and two where the lip was really tall. You had to be careful not to snag it and throw the front end over the bank. But, down here in (turns) three and four, it was kind of up-on-the-edge where you couldn't go in too hard and go over the edge. Both ends were a little bit different, but both ends had potential up there. So, I just had to figure out what it had and hit it in the right spots at the right time."

By the 13th circuit, Darland's high-wire act had led him right back into the corner of Stockon's right eye as he plucked the lead away by the length of an eyelash at the stripe on the outside. Each lap thereafter, Darland constructed an advantage that was impenetrable - to a half-second, then to a full-second, and, finally, to a crescendo of over a second-and-a-half as he entered lapped traffic with less than five laps to go.

Darland had to be perfect shaving the highline with his Hoosier rubber lap-after-lap, but instead of searching high-low-middle to find the fastest way around, the USAC Triple Crown champ applied Occam's razor to find the solution - stick with your gut go to the front.

See Dave and a strong field of USAC AMSOIL National Sprint Car drivers this Friday once again at Bloomington, for the 37th time since the series' debut in 1982.

The event card also includes the RaceSaver Sprint Cars and UMP Modifieds. Pricing for the "Larry Rice Classic" has adult general admission tickets at $20, students (with ID) $10 and kids 12 and under free.

The pit area opens at 3pm Eastern, with the front gates opening at 5pm and cars hitting the track at 6:30pm.

The "Larry Rice Classic" can be watched LIVE on http://www.FloRacing.com/.