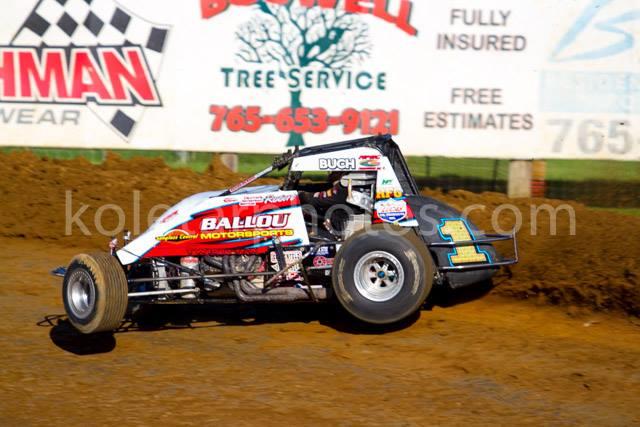 July 20, 2016 Speedway, IN: Time to flee. No, there are no flashing lights of red and blue. It is instead that time of extreme heat when red and blue describes rebel flags flying from pickup and porch. Brickyard 400 has enveloped our sleepy little hamlet. Never mind it being an awful race on state-of-the-art 1909 oval. What matters is when I need lunch or dinner and temporary traffic cops choose to not let me back. Tomorrow is the transporter parade/pedestrian souvenir grab that makes Main Street unavailable. Brother soon hangs sock over door knob (international “no trespassing” sign) so my eastern exodus shall begin.

Two nights of All Star Circuit of Champions in Kokomo is obvious choice. It promises great cast on great track. Kokomo Speedway feels like a prison farm, so I lean toward Ohio progress for NRA 360 sprint cars in Lima then MSA 470 supers at Midvale.

Last week wrapped 29th annual Indiana Sprint Week with Wednesday rain at Terre Haute, Thursday mastery of Lincoln Park by Brady Short, Friday and Saturday upsets by Brent Beauchamp at Bloomington and Carson Short in Haubstadt, capped by Chase Stockon’s Sunday win over champ Robert Ballou in Terre Haute rain date. USAC enjoyed seven winners in seven races, none of them being Brady Bacon, winner of the series rocking chair and now 170 points ahead of Ballou with 12 point races on the Amsoil slate.

I do not easily hand money to O’Connor at Kokomo or Gas City, where they tore up everyone’s seat three hours before hot laps. Putnamville problem stems from Joe Spiker annually ignoring Flat Out requests. Spiker did generate good will on Sprint Week. He leased two buses for 280-mile loop from Lincoln Park to Lawrenceburg then bought tickets for each passenger. The deluge that postponed Terre Haute nearly drowned him too. Half of turn two was under water. Yet his show started on schedule. While moving mud, Spiker treated early arriving fans to free lunch with tent, tables and chairs. Such noble acts made me hand over 25 bucks when entry would have been so easy. Bloomington and Haubstadt still love me after 30 years. Terre Haute matches Lincoln Park indifference, so I scaled tower for Don Smith Classic.

Passing everyone at Gas City sure pumped Courtney full of confidence. He was fastest in Putnamville, started sixth in his heat, and floated four wheels through thick cushion to win going away. In his Bloomington heat however, Courtney tumbled off turn two then could not get his winged replacement into A-main. He got lapped at Haubstadt then third at Terre Haute.

Chad Boespflug (Zirzow/Eberhardt 98e) broke Bloomington USAC standard at 10.73, which would have been fastest with World of Outlaws in 1988 when Indiana’s Andy Hillenburg (Hoffman 69) and Ohio’s Dave Blaney (Nott 48) dropped NTR to 10.84 then 10.68. Chad’s crew is led by Davey Jones and Brian Stanfill.

USAC officer Levi Jones (somewhere between Port Royal and Susquehanna when informed that I was in his hometown jail) did good deed by keeping Sheldon Kinser Memorial alive. After the USAC champ passed in 1988, both Bloomington and Paragon held races in his honor. Keith Ford left that to Mike Miles, who boosted purse prior to selling out after 30 years. Regime that includes Dan Roberts saw Kinser Memorial as bad business. Their initial 2016 Bloomington Speedway schedule showed no 28th annual. Worst of all, they rebuked complaints by charging family with apathy. This incurred Kinser wrath, which is also bad business. Levi’s solution turned USAC Sprint Week date into Sheldon Kinser Memorial, even though it had been Larry Rice Classic while Larry was still around.

Kinser Memorial became Brent Beauchamp’s biggest win. He built a nice resume on Saturdays at Putnamville but was largely unknown until Friday’s massive crowd saw his first career USAC sprint win over Dave Darland, who owns more of them than anyone. Officially, they traded command seven times before Brent pulled away after 20 of 30. Bacon dropped Darland to third trailed by Thomas Jr. and Thomas Meseraull. C.J Leary (Mike Dutcher 17) and Josh Hodges of New Mexico finished fourth and fifth at Lawrenceburg and sixth and seventh at Bloomington. Coons, Jarett Andretti, and Ballou from Row Ten completed Top Ten.

Carson Short from Marion, Illinois led all 30 USAC laps at Tri-State Speedway in southwest corner of Indiana at Illinois and Kentucky. One week ago in Farmington (MO) Short raced sprint cars with and without wings in Gene “Tubby” Black Memorial, finishing third with MOWA and second with WAR until he forgot to weigh. Carson’s father Richard (yes, Dick Short) owned car that I first saw Chuck Amati drive in 1977. Carson carries family Number 21.

Just once for frame of reference, many would like to see Tom Helfrich park his tractors and allow Tri-State surface to develop naturally. He watered before heats and A-main as usual. It stayed stickier than second or third-place would have liked. Short was only too grateful. Cummins and Stockon however, could not pressure Carson into a slip. Ballou again qualified horribly and climbed from row eight to fourth. Andretti achieved only Top Five followed by Critter Malone from row seven in only Sprint Week appearance. Quick to get lapped was Darland, who might not have transferred at all if Isaac Chapple did not flip Donny Brackett from B-main.

Terre Haute Action Track is back under bonnet of Bob Sargent’s Track Enterprises that includes Macon, Lincoln, Paducah, Indiana State Fairgrounds and Du Quoin State Fairgrounds. Had he not been rained out Wednesday during Vigo County Fair, Sargent would surely have doubled the crowd that came back Sunday when fair was all but over. Very little moisture remained. Bryan Clauson came from Kings Royal to fastest Action Track lap at 21.05 then blew right rear tire. Stockon from Sullivan stayed just out of striking distance of Ballou, who led Courtney, Bacon, defending winner Aaron Farney, Chris Windom, and best Sprint Week leg for Logan Jarrett of Kokomo.

Erie, PA native turned Indiana resident Jimmy Light flipped in USAC hot laps Thursday at Putnamville, hammered it together for C-main then put wings back on and headed for Knoxville, Iowa.

Justin Grant’s stint with Steve Phillips reached USAC A-main at Lincoln Park but fell out of Bloomington B-main. Grant went west to Kansas City to win WAR debut at I-35 in Jack Hockett 75. Colten Cottle went C-to-B at Put then headed for Belleville and Fairbury midgets.

Zach Daum made Indiana Sprint Week feature at Lincoln Park before returning to Illinois for ninth in Arnold Knepper Memorial at Belleville and victory in POWRi debut at Fairbury. Keith Kunz swept 1-2-3 at Belleville with Tanner Thorson, Spencer Bayston and Carson Macedo, who ran Doty Classic C-main. Thorson then flipped at Fairbury after ferocious battle with Daum.

Fremont, Ohio’s Stuart Brubaker stopped Brian Smith’s SOD dominance at Winston Speedway in Rothbury, MI. Next night at Crystal, Stu lost his temper in heat race, crashed over the object of his anger, and was disqualified. This week, Brubaker is back in Burmeister 16.

Canada’s Mike Lichty won the first ISMA super show at Jennerstown (PA) in nine years. I saw ISMA wins there by Bentley Warren (’88) and Eddie Bellinger in 1989. When it was dirt, I caught 1984 Laurel Highlands 101 when Dave Blaney and Kenny Jacobs (Ken Reno 4J) split All Star wins. Jennerstown is racy either way.

Ohio’s Jack Sodeman Jr. swept winged 410 features at Lernerville and Mercer this weekend. I saw Jack Sr. race sprints and mods at Reading and Syracuse in 1978.

Anyone who laid long odds on Chase Dietz and Joey Hershey to win 410 features at Lincoln and Port Royal has to be very wealthy today. As a kid, Dietz had done it once before. As a vet, Hershey never had.

New York’s Jared Zimbardi invaded Ontario for first at Cornwall and second at Brockville as Patriot 360 then went C-to-B with World of Outlaws at Lernerville.

Ontario’s Dave Dykstra was seventh on Friday as Ohsweken 360 then towed 400 miles to Port Royal to race as Saturday 410.

My motive for heading east is to see Bright brothers tackle USAC next month. Next week is Tuesday sprints at Grandview, Wednesday at Kutztown, Friday ARDC at Big Diamond, and Saturday at Selinsgrove.