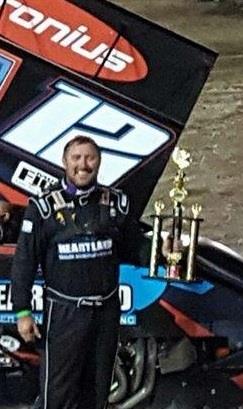 Jerrod Hull and the Heartland Trailer Manufacturing/Neal Tire #12 team racked up their third win in a row with the MOWA series last Friday night at Bloomington Speedway in Indiana. The Sikeston, Missouri driver charged from sixth and won a good battle with Hunter Schuerenberg for his 22nd career feature win with the series. The team has this weekend off before tackling Granite City, Illinois and Haubstadt, Indiana with the MOWA series over the Fourth of July weekend.
Twenty-five cars were on hand at Bloomington. “We started off pretty well,” says Jerrod. “We timed in sixth quick. That was fine. As long as you’re in the inversion, you have a 50/50 shot at starting on the front row.”

Quick timer Kody Kinser drew an inversion of four for the heat races, putting Jerrod inside row two of the final heat. “We were able to get around a car early to run second in the heat race,” he says. “You need to finish in the top two to be in line for the feature redraw. They drew a four, so we ended up starting sixth.”

He would surge forward right away. “We took off early,” says Jerrod. “Scott (Bonar) had the car pretty nice. We were able to get by a couple of cars on the first lap and get into fourth. We battled with AJ (Bruns) for two or three laps for third. We settled in there and got into lapped traffic. We were right there with the two leaders. The caution came out. On the restart, we were able to get to second. There were two good grooves. The cushion was way up there. You could run the bottom. On the restarts, I could go right through the middle too.”

In the latter stages, the race came down to two Sikeston drivers. “Hunter and I had a really good battle,” says Jerrod. “We had some slidejobs back and forth. It was really fun, just a blast. We ended up getting the lead, and I was sure that I had led for a couple of laps when the caution came out. But they put us back in second.”

The set up a two-lap Dash for the win. “We lined up behind Hunter and we were able to get a run underneath him coming out of turn two,” says Jerrod. “Hunter had gotten into traffic a little and messed his nose wing up. That got him a little tight on the cushion. He got balled up a little, and that gave us a good run on him. We moved back to the top and led the last couple laps. The car was working really well, pretty much all over the track. I was moving the wing around to find out where it liked it, and the last couple laps I was the most comfortable I’d been the whole race.”

Jerrod was satisfied with his win from row three on the Bloomington bullring. “It’s always fun to win them, but when you have to work for them a little bit, it’s a lot more fun,” he says. “Hunter did a great job. He’s been really fast, and I know he’ll get his share. We’ll take ours, because you never know how long it’s going to last. It’s going good right now though, and we’ll make what we can out of it. We’ll take this weekend off and send the shocks (Super Shox) back to Brian (Goscinski) so he can go through them and make sure everything’s good to go for the July 4 weekend.”